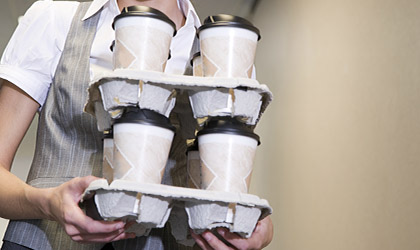 College is stressful, but it’s dangerous when that stress allows room for laziness. It’s normal for people to feel scared about their future and become unmotivated. Especially with the amount of free time that college gives; it can send students into a spiraling downfall if they’re not careful. I’ve watched classmates become unmotivated and have to redo whole semesters and that is not in my four-year plan for getting out of Myrtle Beach. Fall semester 2017, I took the semester off work to get adjusted, I joined a sorority, and I went to class. My schedule was free, but my overall mental health was at a low. I started feeling unmotivated and personality wise I was an asshole. I needed a change, I needed to feel busy, I needed an internship to graduate.

I had remembered my dad talking about a marketing agency that he works with, Three Ring Focus. What an interesting name right? I decided to do a little research: scrolled through blog posts, looked at Instagram, and stalked their website. From their Instagram, you can tell that their posts are natural and candid. They weren’t super posed or overly thought out, they were mostly real-time posts. The only staged posts were for clients. That showed authenticity and they featured a legend, Buff. Half English Bull Dog, half Boston Terrier, Buff is the best security an office can have. Their website had a “The People” tab which represented the team using child-hood pictures and descriptions of their favorite things. It was casual, it was trusting. The copy was interesting and funny. I wanted to work with this company, I needed to. I was very nervous. Understandable, it was an unfamiliar territory and they were an actual agency.

Shoot Your Shot 2018, am I right? Except it was still December of 2017. Close enough. I emailed the president of the company, Andrew Kipple. I told him all about how I was just a small time Myrtle Beach girl, who wanted to spread her wings and fly to the West Coast, and I was going to need his help. Just kidding, I didn’t really say that. I took the skills I learned at Coastal Carolina University, Pinterest, and Youtube and sent a professional email requesting an internship position. I got a reply and had an interview shortly after.

The first thing I did… I went to Old Navy and bought Pixie Pants and a nice blouse. I couldn’t be prepared without a great outfit. I prepped by watching Youtube advice videos and I was asked two out of the thirty questions I was prepared for. It was an internship and I was practically prepping for the CIA.

A week later I’m on my way and I get lost, I can’t find a “big building with large orange shutters” anywhere. So, I call Andrew and tell him I’m lost. What a great first impression. I walk in and the management team is in with a client, a client I knew. While waiting I talked with the lady at the front desk, she told me about her son and all about their Christmas. I had my resume and schedule printed and it was interview time. Piece of cake.

After my interview, I gave them my schedule and we set a start date. I was then given a tour of the coolest office space I have ever seen. What used to be an old recording studio is now a completely custom office space. Each office had their own theme: Elvis, Spiderman, sports everything, and an overall modern eclectic style. My desk was in a room with a stocked mini-fridge, a ping pong table, a mini foosball table, and a Steve. Steve is cool; he’s the designer and likes to work in darkness like a bat. I hope he makes it out west like he wants to.

It’s my first day, I’m in the office and everyone is making me feel at home. I expected to feel like a complete outsider, but after meeting the team I was comfortable. Buff was a big supporter of me joining the team. It also helped hearing how incompetent other interns were. That set the bar pretty low and I hope now that my internship is over I’ve raised that bar for future interns. The first day was slow, first days are always slow but it wasn’t long until I was working.

The experience I gained from this internship is what I needed so I could and can continue to grow in my field. I worked on copy for multiple websites. I was sent sitemaps with vague one-word titles and I had to write copy off that. It’s not easy. Trying to be cohesive, clever, detailed, and brief at the same time is difficult. However, writing copy for a bunch of clients gave me a lot of valuable insight. I know so much more about fishing and waffles than I ever thought I would. I also made social media posts and monthly Calendars for a client. It’s easy to think social media isn’t a job, but it is. Creating and producing content for social media profiles is very similar to creating and producing advertisements. The only difference is when you’re doing it for a business your social media posts also include advertised posts, sponsored posts, and personal posts. The work is tripled. I learned how important it is to plan posts so they are successful in getting engagements instead of posting just to post. I made a couple blog posts as well. The topics I wrote about were related to marketing, so I got to do further research on subjects that I wasn’t fully educated in. I did step by step blog posts and informational pieces.

Working with everyone at Three Ring has been a privilege. Andrew, the President, is the coolest man I have ever met. He’s extremely friendly, absolutely hilarious, and exactly what you would expect from the founder of People of Walmart. He’s a laid-back, hard-working individual who from the very beginning had my trust. Vice President Luke is a little more serious. Hands down has the coolest office if you’re a sports fan or have an obsession with bobble heads. Head of Accounts is Mr. Kipple/ Alan. He is an incredibly sweet and loving old man. Who, I am sure, killed it in his prime years because he is still killing it now. Adam, the Creative Director, took me by surprise. I honestly thought he was a little grumpy, but the sun came out and so did his hilariously sarcastic personality. Senior designer Jess, she’s a badass. I can probably just leave it at that. Josh resides in the fully spider-man office and is one of the designers. My little brother would probably pack up and move in if he saw how much Spiderman is in this office. it’s pretty rad. I’ve already talked about Steven, we’re the definition of BFF’s.

I’ve very much enjoyed my internship at Three Ring Focus. On my own time, I created an online portfolio and restyled my resume. I started promoting myself on social media in a light that is more reflective of my “mission”. I’ve found myself more creative, ambitious, and confident since being here. The company can’t take full credit for my new-found enlightenment, but they definitely deserve a bit for setting me at ease. I’m no longer worried about my future. As long as I keep grinding like I am, I’ll be just fine. I will surely miss being here, but who knows I am only a junior. Maybe I’ll come back for my senior year.